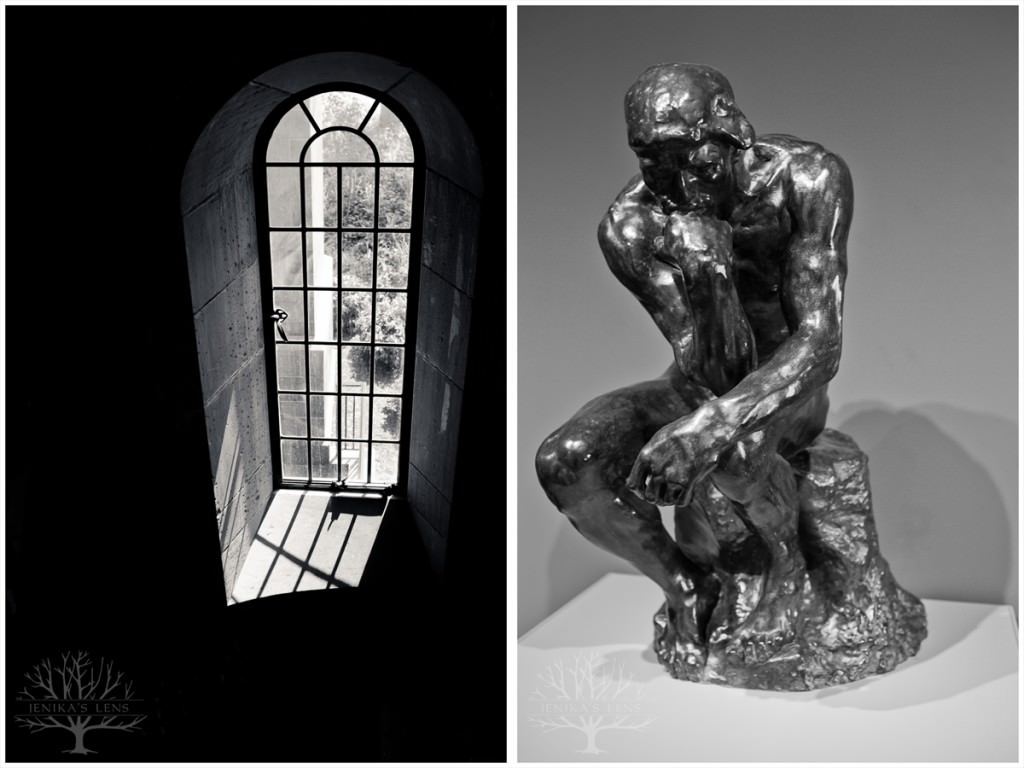 In one of my first classes in graduate school, my fellow students and I paired off to practice some therapy skills.  The task that day was to explore a situation the other person had experienced.  But there was a catch:

We couldn’t ask a single question.

“What happened?  How did that feel?  Who was there?  What happened next?”  – all off limits.

Until you’ve tried to have a get-to-know-you conversation with someone without being able to ask anything, you don’t fully realize how much we rely on questions.

It’s like trying to recite the alphabet while holding your tongue.

But the exercise forced us to stop machine-gunning people with questions, and start practicing something else.

Something I’ve been meaning to write about the whole two years I’ve been writing this blog, but just haven’t.  I’m not sure why, really.  Perhaps it’s one of those small things that people roll their eyes at because they think they already know all about it.  Or because it sounds small and unsexy and a mere footnote compared to more glamorous business topics. 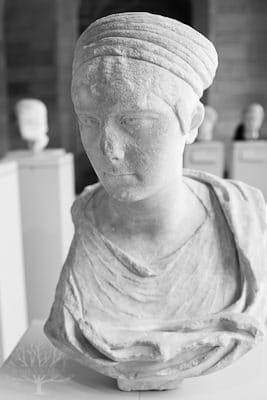 But not having a grip on this particular skill results in fewer sales and more problems during sessions.  Because it means they’re less likely to tell you what’s REALLY going on.

Ever had a client neglect to mention that they really wanted a photo of just them and their grandma during their wedding, and they got kinda cranky with you during a sales session because you hadn’t read their mind?  Or had a client morph into a crazy person over email, and you found out later that their mom had just passed away?

Or generally had a time where if only you’d known ______, you could have done ______ differently with no trouble at all?

Clients are just regular people, and people aren’t particularly good at communicating their emotions and desires even to the people closest to them – let alone a stranger staring down the barrel of a lens.

So what’s this mysterious skill?  Something called “reflective listening.”  In short, after a person speaks, you reflect back to them what you just heard them say.

Note that reflective listening is different than paraphrasing or shuffling their words around in a different order.  That just confirms that you heard the words that came out of their mouth.  Rather, it’s reflecting back to them, in your own words, what you really heard them say.

A few of you out there might be thinking this is namby-pamby fluff.  There was a time when I might have agreed with you, but I’ve seen firsthand what can come out when you use this technique, so I advise you keep reading. 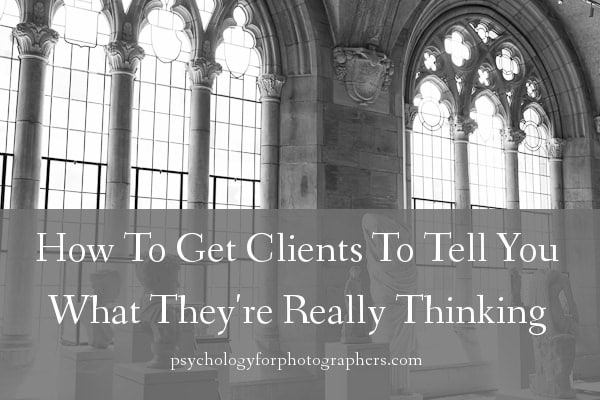 Bride:  “I’d like to make sure you get photos of all of our grandparents and my sisters.”

You:  “It sounds like your family is a really important part of your day!”

Bride:  “Yes, and they’re being great.  My sister is an interior designer and she’s making all the bouquets for the centerpieces.”

You:  “So photographing the bouquets is meaningful because they show how much your sister cares about you.”

Bride:  “Yes, and the cake too, my grandmother is helping make it.”

You:  “Wow!  So maybe we can make sure to work the schedule so I can be around when your family is setting up, because it sounds like what they’re doing means a lot to you – and pictures of them doing those things would be wonderful for you to have.”

Reflective listening often elicits comments that a client may not have thought to tell the photographer.

When you respond with a reflection, rather than a question, the client gets to “re-see” what they just said.  And this usually prompts them to fill in whatever gaps they perceive with explanation or details.

Let’s look at the example above.  In the blur of getting things done, they often fail to communicate all the true “heirloom aspects” of their wedding that would be useful for you to know.  Instead, they telegraph what they think you expect to hear, or what they think will get the job done.

Understandably, the statement “make sure you get photos of person X, Y, and Z” might make some wedding photographers cringe (This person has no idea how useless/cumbersome ‘shot sheets’ are on an actual wedding day, there’s no way I can guarantee all of this, group shots are so boring, etc).  But simply reflecting back the feeling behind the comment (Wow, sounds like your family is important to you) gives the client a chance to say what’s really going on.

In this case, it might be that the family is showing their love through the acts of service they’re giving.  And that’s a core part of what the bride wants to remember about her day.

So instead of wasting time trying to corral grandma and big sister for individual formal shots, which might have been your first instinct based on what she asked for, you can instead focus on getting a shot of grandma working on the cake, and maybe her consulting a handwritten recipe.  Which would mean a lot more to the bride in the end than just “a picture of grandma.”

The bride might not be aware of all this, exactly, when she says she wants “a picture of grandma.”  That’s why it’s important to pull out what’s really happening, so that you – the professional – can give her something even better than she thought to ask for.

When people seem to make annoying demands, it’s often because they’re trying to get something specific – and finding out what that specific thing is will often make them happier than complying with the word-for-word request. 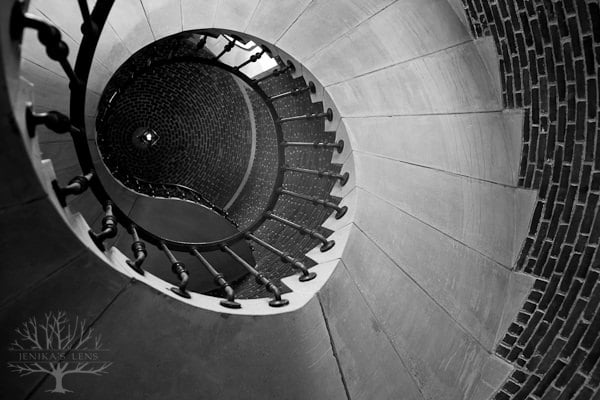 A big part of reflective listening is reflecting back what you heard, without judging what the person said.

By so doing, you’re giving the person a chance to see how they’re coming across – which may or may not be how they meant to come across.  And that’s where it gets interesting:

You:  “So you’re interested in small desk prints rather than displays.”

Sarah might be surprised to hear you say they don’t want to hang stuff on the walls, since that’s not what she meant to communicate.  And boom – this gives you the perfect chance to hold an 8×10 and a 16×24 up for her to see the difference.

But rather than you coming off as argumentative (“8x10s are too small for the wall!”), which would probably only make Sarah more determined to defend her position, your suggestion to look at bigger prints makes them feel like you’re trying to help her achieve her goal.  And that can be the difference between upselling – and not.

This kind of reflection is sometimes called “building discrepancy” – or highlighting the difference between what they want and what they’re buying.  If they say they want to hang something on the wall, but they want to buy an 8×10, you can reflect that discrepancy by highlighting what an 8×10 is actually best for – desks and bedside tables.

Another way to build discrepancy is to overstate what the client said, so you can see whether they really meant something:

(This technique is taught in the book Motivational Interviewing, a classic text about reflective listening):

Bride:  “I want to make sure we get every single shot on this list!”

You:  “So family formals are really important to you – even more important than candid shots of your family interacting.”

Telling the person what you really heard them say (they want you to take time away from other kinds of photos to make sure you comply with the formal shot request) can surprise them.  And make them evaluate whether or not they really want what they just asked for.  Sometimes they’ll stick with it – which is good for you to know.  But sometimes they aren’t aware of the tradeoff they’re making.

Either way, your slightly “overstated” reflection makes them pause and consider, and calibrate how much it really matters.

Client:  “I didn’t want any black and whites!”

You:  “You’re frustrated because you were expecting all color images.”

Client:  “Well, I know you mentioned before that there would be some black and white, but I want to give THESE images to my mom, and she only has color in their house.”

Sometimes people escalate expressing their anger solely because they feel like they aren’t being heard.  Not because they’re actually that mad, they just think they need to be to get your attention.  When someone repeats in their own words what they’re mad about, it makes them feel acknowledged, and surprisingly often, people will back off.

In the example above, you might be tempted to hear the client’s first sentence and launch into a defensive “but our contract says ____,” which usually just makes clients feel stonewalled.  Reflecting back gives them a chance to clarify their actual expectations, and tell you what the REAL issue is (the gift for the mother).  And once you know the REAL issue, you can get their attention off of expressing their frustration and onto a solution.

How often does someone really take time to listen to what you say, and acknowledge that they heard and understand how you feel?  Reflecting back what someone said is the lowest-cost client service you’ll ever offer.

It helps you anticipate and respond to real needs, diffuse anger, and locate the source of problems faster.

P.S.  Pssst….want to know what clients really think about money?  Click here to get on my email list, and you’ll instantly receive a free guide that explains how clients make decisions about spending and cash….