Is It Time To Change Your Packages? 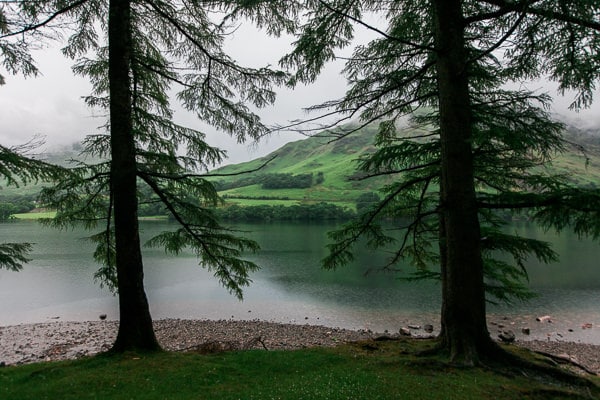 Kenneth Cole said something interesting in Forbes this month.

He learned quickly after starting a footwear company that his job isn’t just to “create great-looking shoes.” He had to find out what people wanted to wear, then give it to them – just in his own way.

This mental shift is elegantly simple – but hard.  Especially if we’re selling the result of an art or craft – we want to focus our attention on getting better at the craft – create better-looking shoes, if you will.  We assume people will buy once we have something good to offer – so what do we do when they don’t?

Cole had an interesting method for answering that question, and I’ll tell you what it is in a minute.

I’ve had some interesting questions recently about packages – how many should we sell and what should be in them?

When it comes to packages, let’s step back and remember one thing:

A package is nothing more than a set of decisions you have made for a client.

You could offer every kind of photo product ever.  Simply hand your client a big catalogue, and say “go for it!”

If you throw a huge range of products at them, unculled, unsorted – there is a solid chance that they will either cling to the familiar (e.g. grab some 8x10s) or say “I’ll get back to you” and disappear.

A package is really just you saying “Here is a curated selection of things, one that other people have been happy with, that I recommend to you.”

Essentially, you’re narrowing the decisions from hundreds of thousands of possibilities to – do you want A or B? 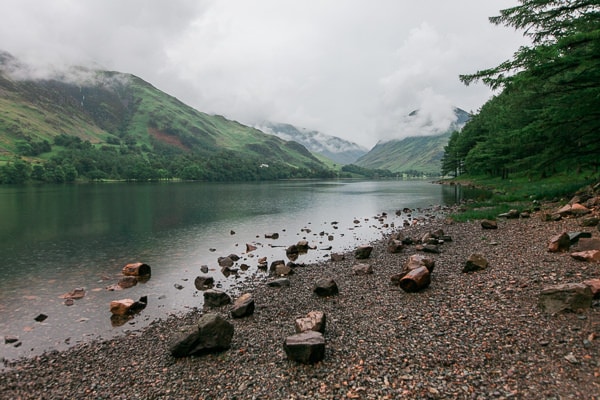 Packages, or bundles of pre-made choices, help ease people’s minds as they make a decision.

For one thing, when people are unsure what to do, they want to know what others are doing.  Seeing packages and knowing “most people buy package B” reassures them that this is the ‘right’ thing to do.

People are also not good at judging things in absolutes.  If you handed people a metal weight and asked them to guess how heavy it is, the answers might vary widely.  But if you hand them two weights and asked which was heavier, they could tell you immediately.

Interestingly, buying decisions aren’t all that different.  People don’t always know “Do I like this or not?” but they can usually tell you which of two options they like more.

Packages, therefore, pivot their attention in your favor.  Research shows that “do I want something or not?” is a harder decision to make than “which of these do I want?”  Having packages focuses their attention on decisions they’re more adept at making – comparing a few things and deciding what they like more.

When you set your packages – or rather, when you make these decisions for your clients – keep these things in mind:

1) Know what your clients actually want.  This requires talking to them.

Back to Kenneth Cole for a second.

Once he understood that he needed to more than just make cool shoes, he realized he needed to go see what people really wanted, rather than simply inventing things out of his own head.

He says: “I’d go to clubs at night because people would dress to impress, and I’d try to interpret what they wanted.”

There’s an interesting dance there between creativity and capitalism.

He could of course invent whatever shoes he wanted, but maybe people wouldn’t snap them up as fast.  But armed with the knowledge of what people were actually doing, he could inform his creativity in a more successful way.

So the lesson we can take from Cole when we want to sell more is:  Know what it is that your target client is trying to achieve.

If you’re a portrait photographer – do most of your clients want something fresh over the fireplace, something to satisfy the grandparents, something to send out to people at Christmastime?

Consumers, especially women, usually shop with an “end use” in mind.  In other words, they don’t just buy a pair of pants, they buy a pair to wear to work or to wear while running.

It’s much easier to sell someone a package that “has something to give to each grandparent, a keepsake for you, and a handful of five photos perfectly-sized for web sharing” than it is “two mini albums, one large album, and five low-res files.”

They are, of course, the same thing – but language matters.  Describing them to clients in terms of what they already want saves them mental work and sparks enthusiasm.

(If you want help figuring out what your target client wants, I recommend Irresistible Website.) 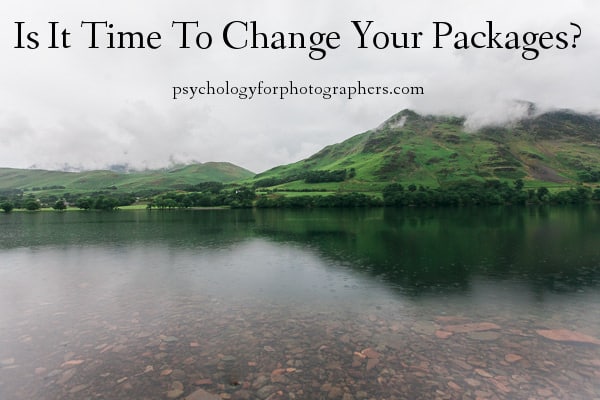 2) Be willing to test, see how clients respond, and change when necessary.

Most creatives just want to get “the pricing thing” DONE so they can go back to taking photos.  The reality is, most successful businesses are in a constant state of testing and refinement.

If you find consistently that what clients say they want differs sharply from what you offer in your packages, it might be time to refine either your marketing or your packages.

For example, if clients consistently say they “just want digital files” when you really want to sell albums, then it’s possible you need to either:

A) Change your marketing:

They could want digital files simply because all they know about photos is that they can share them on Facebook, where they’ll get a ton of likes and feel great for a few hours.  So why would they want an album?  DO ALBUMS GET ME FACEBOOK LIKES?

If you want to sell people something that they don’t already have an “end use” in mind for, you have to supply the end use.  Do your website and blog do that?

Does your home page gallery alternate portfolio images with images of people looking at albums in their homes?
Do your testimonial-givers reference their albums?
Does that charming video interview with the bride and groom talking about how much they liked their images ALSO show them holding an album?
Does your blog show not just “sessions” but regularly feature images and stories of people holding their albums, talking about albums, revisiting albums from five years ago and explaining what they mean to them?
Do you post “sneak peeks” of about-to-be-delivered albums on social media?

No?  Then why be surprised when people aren’t eager to buy one?

Their mind is fixed on an end use they’re familiar with (social media social currency), and their picture of “an album” might just be a dusty, rattling plastic contraption with slots for sliding in drugstore prints.

Or B) Change your packages:

You could have one single all-inclusive package, which they purchase up front.  The good news is that it eliminates haggling because they’re signing up for it at the beginning.  It also tends to pre-qualify people in the sense that if they don’t want it, they don’t hire you.

That last benefit is also the drawback – the higher price might scare people off before they’ve fallen in love with their images, or who aren’t emotionally attached to hiring you yet.

“Bottom” or “entry” packages might get a bad rap for being useless, but they aren’t useless if they’re making people breathe easier by letting them feel like they’re not committing to a huge sum up front.

If you want people to buy albums, but need to have an “intro” package price that eases in the commitment-shy, you can play with how they’re presented:

You can have two packages.  One a basic album, and the second a slightly nicer album with digital files included.  Make the price difference between them a fairly minimal jump, and buying the higher package becomes a no-brainer (see this strategy).  Everyone gets an album because both packages contain one.

If people still complain that they just want digital files as a way to try to lower the price, you could make the files not for sale at all, but only offer them as a gift upon purchasing an album.

OR, of course, you could offer them as a standalone package and simply price that package high enough that buying an album actually ends up being less.

There isn’t actually a “right” way to do this – 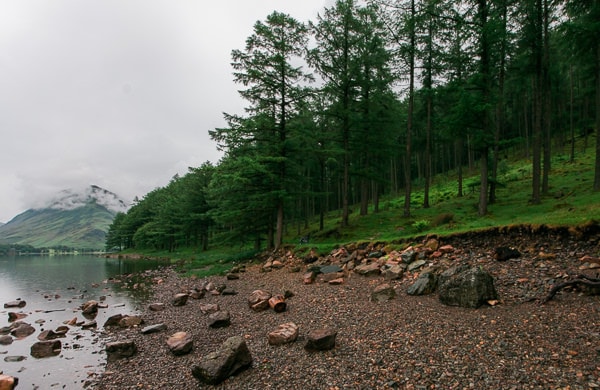 Because it has to do with what your clients are trying to accomplish and how they reason through decisions.

You have to step into the conversation in their mind and see what they want – then adjust your offerings accordingly.

Your options boil down to: Make your packages fit their decisions, try to change your clients’ minds before the sales phase, or make your preferences make the most economic sense.

3) Be clear yourself on what you offer.

You would be surprised how many (experienced!) people I talk to who are confused by their own packages.

Or who don’t remember what’s in them, or don’t know how the math works out between hard costs and profits.

If you find your packages confusing and forgettable, chances are that clients will too.  Make them as simple and clear as possible.  Use descriptive names and illustrative images to make the options concrete and memorable.  (If you need help, check out Irresistible Words.)

Whatever you offer, know your numbers inside and out.  That way if they ask whether they can substitute X for Y, you can tell immediately how this would impact the cost.  You’ll be able to answer confidently, which reassures them.

4) Know that the way you arrange items will impact what people buy.

People’s decisions are highly influenced by predictable but somewhat arbitrary factors that have nothing to do with the products themselves.

We’ve discussed these before, so be sure you’re familiar with why people pick the middle, why it matters what you show first, and how to use pricing to influence which options look the most attractive.

In the end:  Make good decisions for your clients.

Find out what they want, and then use your knowledge of what they need, what you do best, and a bit of psychology to give them the best possible products.

Have you ever made any package changes that helped sales?  We’d love to hear about them in the comments!

Posted in Decisions and Biases, Sales

3 Things I Screwed Up in My New Photography Business

The Costs of a Traveling Photographer

Make Your Fear of Success Obsolete

What We Can and Can’t Learn From Our Photography ‘Heroes’

The Two-Part Psychological Trap That Snares Your Marketing