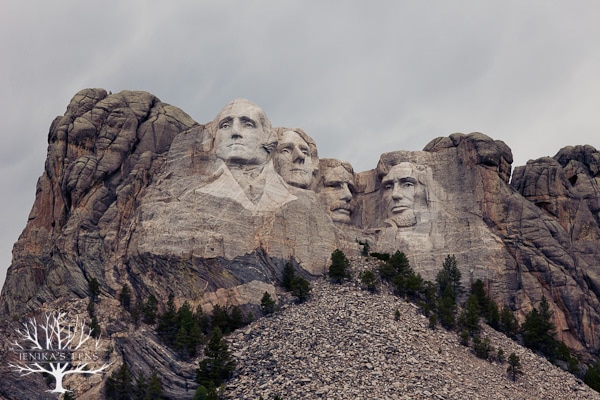 Today we’re going to talk about one of the most under-used marketing techniques in the photography business.

And it’s not just for photographers.

“The year was 1999, and our founder Nick Swinmurn was walking around a mall in San Francisco looking for a pair of shoes….”

So does Burt’s Bees:

“I guess you could say it all started because there weren’t many jobs up there north of Bangor.”

And so, by the way, did the Roman Empire (yep, they cared about marketing):

“The man I sing, who first made way,
predestined exile, from the Trojan shore
to Italy…”

We’re talking about The Founding Myth.

Smart empires, large and small, have a founding myth.  A tale of the beginning.  How and WHY the empire – or business – came to be.

In its simplest form, a Founding Myth tells you the story of the major player(s), the big obstacle they were motivated to overcome, and what happened next.  That’s it.

Myth, in this case, does NOT mean “fake” 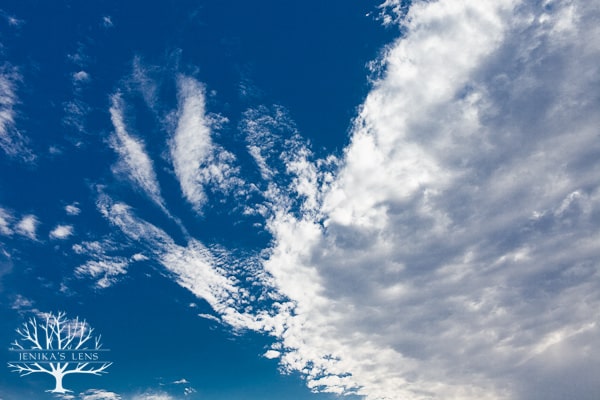 As David Minjamuri wrote in Accidental Branding: “The word mythology comes from two greek roots, mythos, meaning a narrative, and logos, meaning a speech or argument.”

So in this case, a myth is just the narrative that gets told about something.  For our purposes, the reason you do what you do.  Starting at the beginning.

We love hearing Founding Myths, because they usually start when someone is uncomfortable or tired, and goes seeking for a better place.  And hopefully, they meet with wild and unbridled success.

We enjoy reading founding myths because we all have some amount of dissatisfaction in our lives, and we relish seeing someone else squash the status quo and do something about it.  Especially when they create something that will help us do the same.

We love the exhilaration of possibility.

Like Zappos, the shoe-selling giant, starting because one guy got frustrated wandering store to store.  Or Burt’s Bees, the natural beauty-care juggernaut, starting with a woman selling beeswax candles at the 8th Annual Christmas Craft Fair and Bake Sale.  “By the end of the day, we’d taken in $200, and we knew that our business venture was bound for glory.”

This builds trust: “They’re not so different from me!”

A business in the throes of success can easily become impersonal, detatched from its customers.  Clients can start to think “Meh, they’re only in this for the money.”

And when people see the obstacles you had to overcome, those sleep-deprived, money-scarce early days, they respect you more.  They see the cause you’re fighting for, how that fight benefits them, and feel good that you’ve worked so hard to create something that helps them.

There are some successful photographers who have, intentionally or not, created their own Founding Myth that helps us love, relate to, and admire them:

Jasmine Star walked away from law school because she wanted to do something she truly loved, then overcame some serious family crises along the way.  Sue Bryce hit rock bottom before starting a glamour studio in her garage that soon grew to a $20,000 per week business.

They didn’t have absolutely everything handed to them on the platter, which makes them seem more responsible and wise.  We see that they are hard-working and dedicated to their dream – and this helps us trust them more.

Believe it or not, you have a story in you that can be just as powerful. 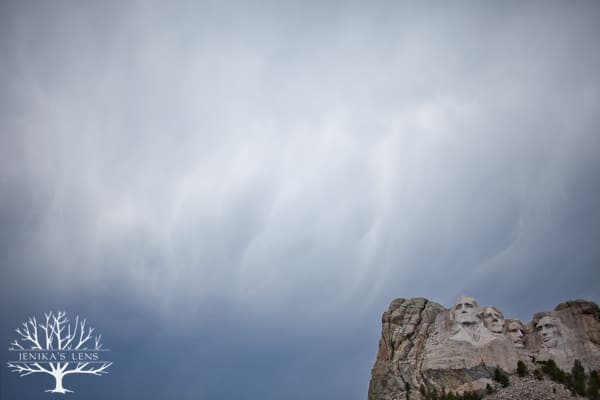 Founding myths don’t have to be dramatic.

They just have to start with the beginning.  Ask yourself:

1. When was the moment you started really caring about photography?

2. What did you have to overcome to start doing it?

3. What made you think “Nobody is doing THIS yet…but I can!”

4. What frustrated you about the status quo that made you want to change things up?

5. What do you want your business to accomplish?  What are you fighting for?  What makes it worth all the hard work?

It’s worth thinking this through, because:

Let me give an example.

Let’s say you’re out to buy a new fishing pole.  (Just roll with this.)

Which website paragraph is going to convince you more:

#1: “Angler Outfitters is dedicated to producing the best fishing poles in the world.  Each of our fishing poles is crafted out of the best available materials.  Check out our new Graphite Ranger – you’ll love it!”

#2: “John Dugan grew up hoisting trout out of clearwater Montana streams, with a stick for a pole and bait he dug himself.  When John got older, he grew tired of fishing rods that cracked and rusted.  He was sick of reels that looked shiny in the store, but became tangled and clogged once he was waist deep in his favorite fishing hole.  These shiny designs just didn’t cut it, especially when produced by big manufacturers in faraway cities who had clearly never spent a warm afternoon on Boulder River.

So John did what any self-reliant westerner would do:  He built his own fishing pole.  Crafted perfectly to withstand the tugs of the biggest bass, the algae of the deepest waters, and the blazing heat of Montana summer sun, this new 9-foot rod will take you back to summer afternoons spent fishing in your own secret spot.

It took me around three minutes to write that, and I know very little about trout, Montana, or 9-foot fishing poles.  (But Boulder River is a real place – thank you, Wikipedia.)

Imagine what you could do with your story, your passion, and the brand you care most about – your own. 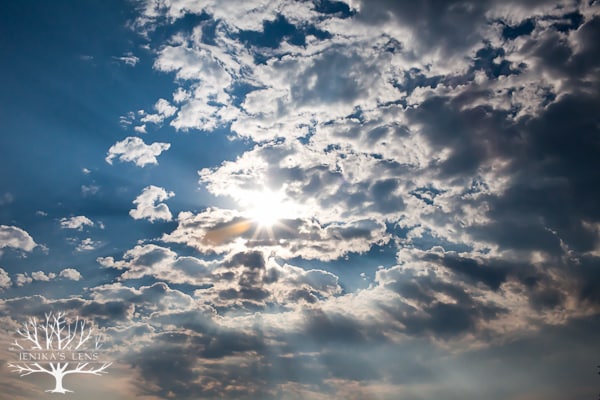 Founding Myths are more than just a bio.

A Founding Myth is not just a collection of biographical facts, or even a retelling of why you got into photography.  It’s a carefully-crafted narrative that explains why your business came into being.  The problem you set out to solve, and why you were perfectly positioned to solve it.

Yeah, maybe our fisherman John had a background as a small businessman, and maybe his wife hated the fishing pole thing and begged him to find a “real” job.  But that isn’t relevant to the story – he still had the chops, the desire, and the chutzpah to create something, and he did.  And the result is a dang fine fishing pole.

By telling you the essentials of his story, he helped you see why his fishing pole would help you more than anyone else’s.  He also built trust with you that made you feel safe giving him a shot.

Founding myths put three powerful psychological elements on your side:

You may not know anything about John Dugan, but it probably won’t take you long to get on his side.  Yeah Montana!  Forget you, big-city manufacturers!

Even if you don’t fish, you can probably relate to the idea of a big business manufacturing a product the designers don’t actually use.  You trust a crusty, experienced fisherman like John to create something better than an impersonal, faceless business.

It’s no different for any other business.  Humans naturally like being in groups and on teams, and nothing strengthens a team like a Big Bad Obstacle.  We will prevail!  In this case, “prevailing” just means buying John’s fishing pole, because he already did the hard work. 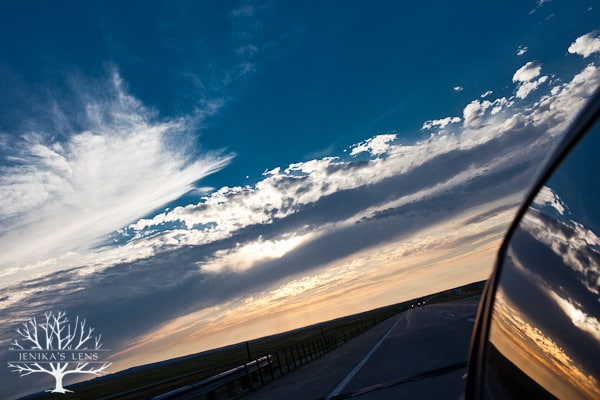 #2: “The Everyday Hero Overcoming a Problem”

If you care about fishing, you want someone like you designing the pole, someone you can imagine overcoming the same struggle you have.

John has been there in hip waders, he knows what it’s like to untangle a line, muttering under his own breath, wasting a perfectly good afternoon cleaning crud out of his fishing pole.

He has felt your pain and he has done something about it.  It could have just as easily been you, but he put in the hard work and now you get to benefit from it.  Easy!

Stories are easier to visualize, and that visualization helps you remember the key information better.  Stories convey a lot of information in a few short sentences or paragraphs.  You can also say more than you write by allowing people to read between the lines.

Plus, stories are more fun to read, and it doesn’t matter how great your product or bio is if no one reads about it.

“I picked up a camera at age 5 and have been hooked ever since.”

“On my fifth birthday, my mom was too busy lighting my birthday candles to notice me sneaking the Kodak out of her purse and proceeding to waste $20 worth of film taking pictures of the linoleum floor.  Needless to say, my composition skills have improved since then.”

The first one is dry and factual.  The second is snicker-worthy, delivers the same exact information, and creates a personable relationship with the business owner.  Score!

Find a way THIS weekend to incorporate your Founding Myth on your website.

Ask yourself the 5 questions above, and use your human story to show why you’re running this business.

As Simon Sinek says, people don’t buy what you do, they buy why you do it.  And a Founding Myth is an engaging, entertaining way to showcase your “why.”

The most effective Founding Myths can be related in a single paragraph, a 30-second speech, or the briefest of videos.

For heaven’s sake, don’t go on and on.  The simpler, the better.

We don’t need to hear about every twist and turn – just the major players, the major obstacle, and why you overcame it.

Keep the details on a human level.  Microsoft has a cool founding story, but they totally blow it when explaining it on their site.  It reads like an economic report when it could read like a gripping novel.

Want to know the deep down secret of why this works?

A Founding Myth doesn’t just tell your story, it tells the client’s story – something they relate to, something that shows them how you’re going to make their life better.  Whether they’re a fisherman who just snapped another pole, a bride who needs someone she can entrust with the biggest day of her life, or a mom who thinks she simply doesn’t have time or $2000 to just “capture memories,” your founding myth shows that you get them, you’ve been there, and you can do something amazing about it.

There is no more compelling offer than that.

I know some of you may be wondering:  “Is it worth it?”  Here are some of the words rolling in during the past 24 hours: 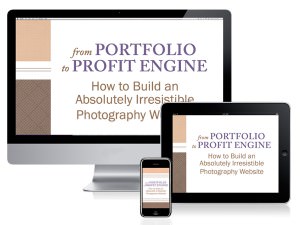 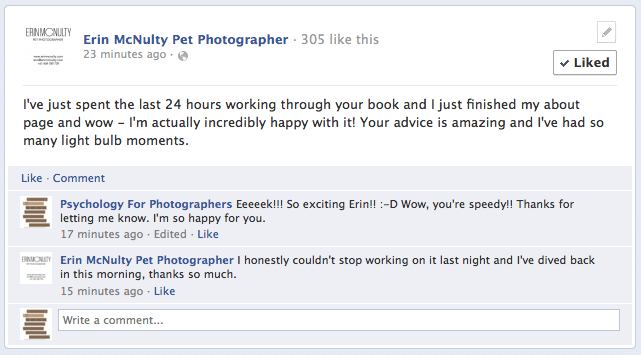 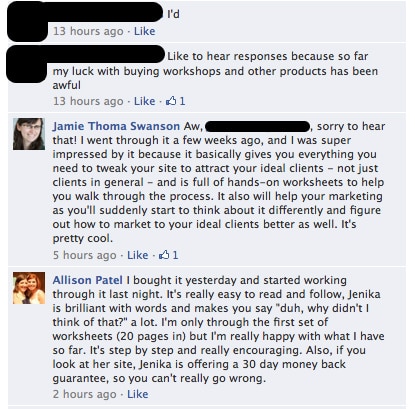 I know that there are a lot of products out there, and I have no interest in just “adding to the noise.”

I created this e-book to spare anyone who wanted it the hassle of the research, the trial and error, the lost clients, and the frustration that I endured in creating my own site all by myself.  It’s full of straight talk and action steps that are grounded in psychology and juicy best-practice of marketing.

This e-book contains everything we’d work on if you splurged on 4+ hours of one-on-one website mentoring with me, plus additional BONUS material from some of the best minds in the business – Sue Bryce, Kristen Kalp, and Spencer Lum. 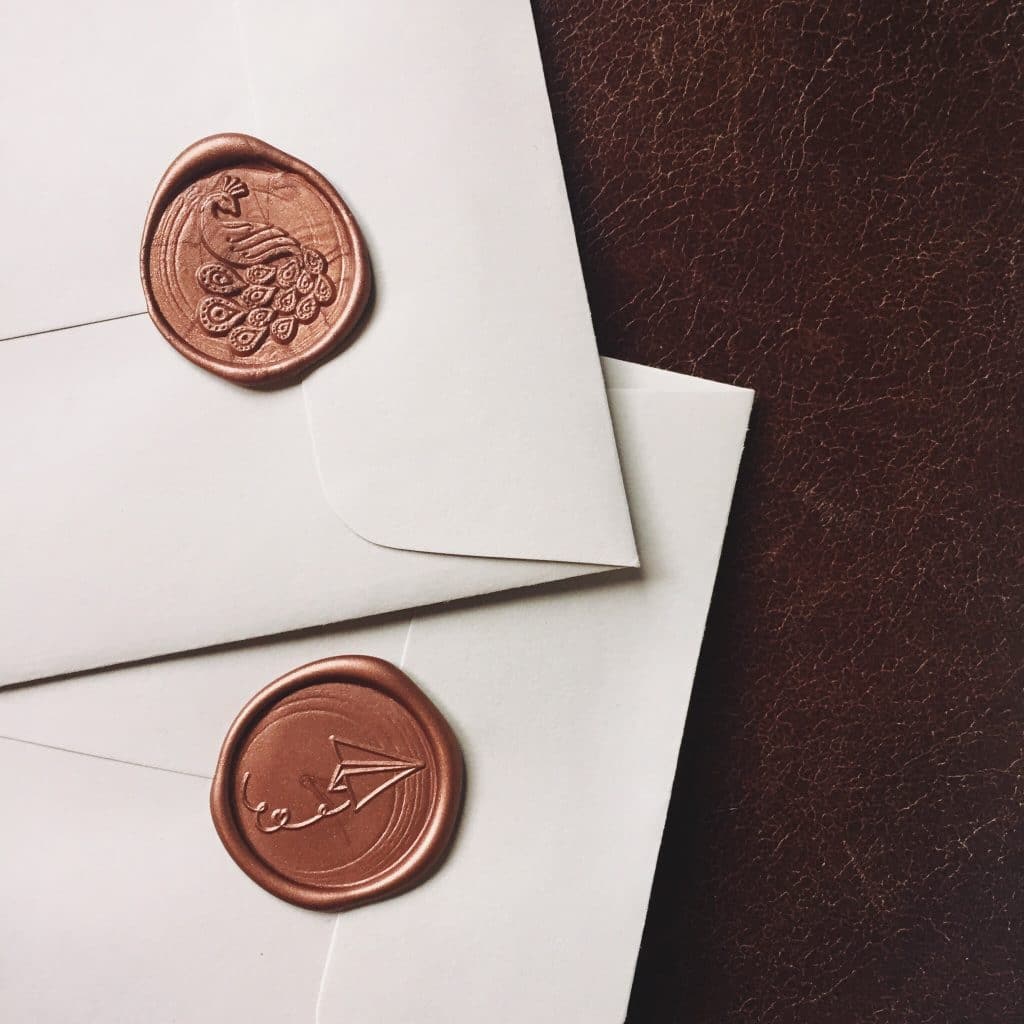 What Pottery Barn Teaches Us About Subtle Sales 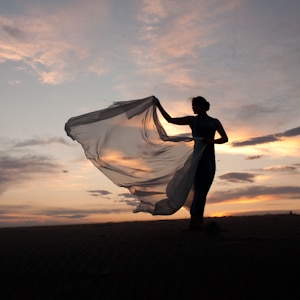 Q&A: How Do I Refuse Inquiries For Single Images?