The Reject And Retreat Sales Technique + How Should You List Your Prices? 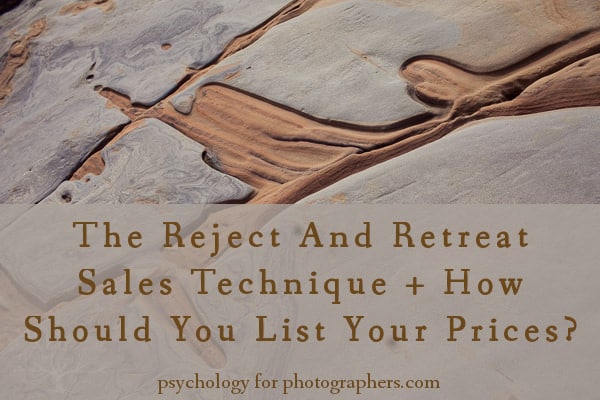 A determined knock at your front door interrupts your afternoon.

You open it and no one is there.  Oh wait.  Your gaze drops down two feet and you see a spectacled kid in a soccer uniform.

You have no time, and no cash in the house, and this is the third fundraiser you’ve been asked to support in the past week.

You move as if to close the door, when he continues.

Now things feel a little different.  You don’t want a $5 ticket, but you could at least get a $1 chocolate bar.  And oh yeah, you do have four quarters in that jar.

In his book Influence, Robert Cialdini describes what happened here – something he and others have termed the “reject and retreat sales technique.”

The idea is, you make a large proposition first (in this case, $5), and when the buyer says no, you ‘retreat’ to a second, more “reasonable” offer ($1) – to which the buyer is highly likely to say yes.

It’s an old negotiation trick and, as Cialdini is quick to point out, this doesn’t just work with pocket change.  A more real-world example:  A dealer of billiard tables has a high-end $3,000 table and a starter $329 table.  Which should they show a customer first?

Why would this happen? 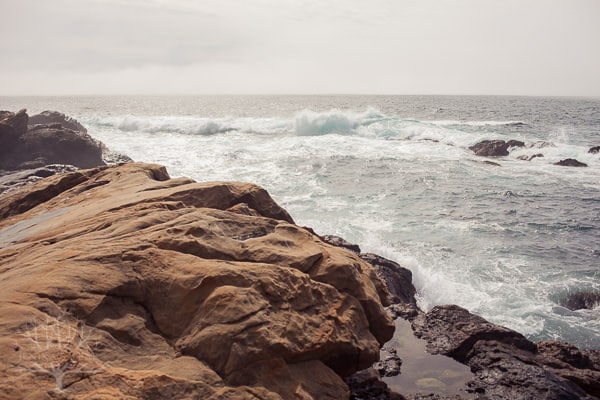 Well, Cialdini proposes, in part because of something called reciprocity.  When someone ‘gives’ something to us, we want to ‘give’ something in return.

In a negotiation, if someone makes a high demand, and you reject it, and then they ‘concede’ by making a smaller second demand, you feel somewhat obligated to meet them halfway, or to give them something in return.  After all, they made a concession – why shouldn’t you?

It’s part of why the $1 candy bar seems so reasonable.  If you won’t buy a $5 raffle ticket, you could at least give them $1 for the chocolate bar.

Of course, in reality, you don’t have to buy anything at all, and it’s not a negotiation.  But it feels kind of like one sometimes.

Cialdini describes people who “fall for” the reject-and-retreat sales technique as being ‘duped’ or ‘victims.’  And in a way, I can see why – it can be used to manipulate.  A fundraiser could have people carry around $5 raffle tickets for the express purpose of just selling conciliatory $1 candy bars.  In a way, the technique can also take advantage of one of the best parts of humanity – the idea that if you do something good for me, I should do something good for you.

But I don’t think the technique is inherently manipulative unless you mean it to be – because there’s more at play than just reciprocity. 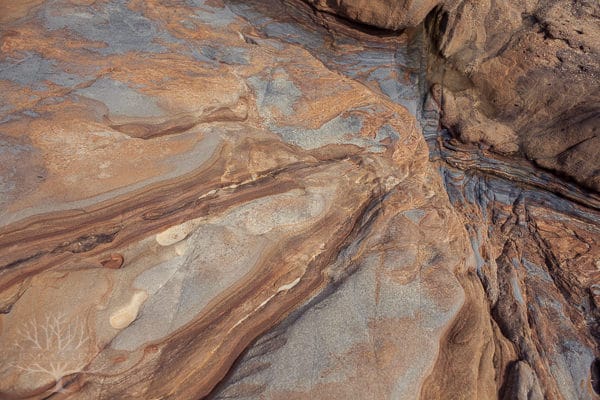 If you’ve read this free e-book (and I hope you do!) you’ll already know that there’s something called anchoring.

So if I’m selling vacation packages, someone probably comes into my office with an anchor already in mind for how much the vacation ‘should’ cost.

And that number might be totally arbitrary.  It might be based on a news article they read.  Or how much they spent two years ago.  Or how much Aunt Marge spent last summer.  Whether those things are actually comparable or not, or whether that anchor number would actually buy them the vacation they really want, they probably have something in mind.

Whatever I show them first, I have no way of knowing whether that will seem too high or too low to them.

So I might as well start at the high end of my offerings and move down, to give them a sense of what top dollar gets them, and to hopefully re-anchor them to the price range I have to offer them.  Which is, after all, more relevant to their current decision than what Aunt Marge spent.

Of course, some people have strict budgets.  They’ve saved $1500, so that’s what they have to spend.

But even so, it still makes sense to start high because of the interesting side effects of starting large and moving down.  For one thing, when they see what luxe vacation packages there are, they might decide to re-prioritize something else and increase their budget – it’s not up to me to pre-judge their financial decisions, that’s their business.

But more importantly – people tend to feel more satisfied with their purchase when this technique is used, because they feel like they were more of an active part of the process than if they just went right to their final price point.  They take more responsibility for their decision.  They feel more in charge when there was some back and forth.

This is probably at least partially due to something called the contrast principle. 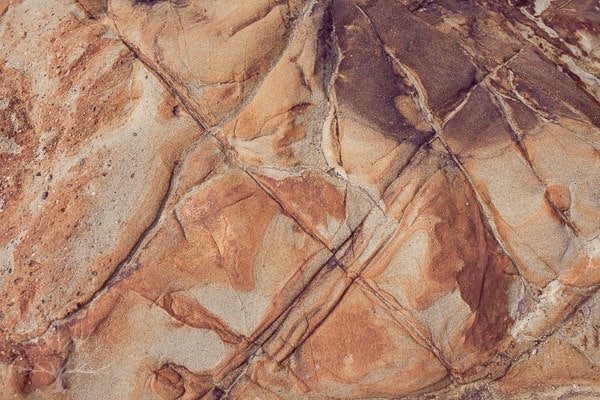 After a minute, I swap them out for two 10 lb weights.

Your brain takes into account what it just experienced when evaluating what’s currently happening.

If you show someone your highest offering, and they buy the middle one, then it probably feels more like a good deal than if you started with your lowest offering and asked them to move up.

So, overall, given that you sometimes just have to make a decision, I’d say that listing high to low has the most psychological weight behind it, with the higher benefit to your clients.

But not just because of the ol’ reject and retreat sales technique, though that’s worth learning about.

On one hand, “retreating” from the high offer might make the person feel like you’re ‘conceding’ and being reasonable.  In my evaluation of the evidence, the more important factor is that it likely readjusts how they mentally frame and judge your prices, and how those choices end up feeling – which may result in higher sales averages.

I would not recommend being all sneaky and artificially creating a huge package just to increase your sales average (there is a limit on how this works anyway – showing someone a $10,000 vacation is not going to make them appreciate the $1,500 one more – it’s going to make them think you’re crazy, and they’ll probably discard that outlier from their mental evaluation anyway).

But the evidence does seem to show that, all things being equal, starting with the top package is your best bet.

There aren’t many courses or e-books I take time to recommend these days.

Not because there aren’t great ones out there, but because I don’t want to regularly be shouting at you about all the stuff that’s available.  I think we have a tendency to kind of find what we need, when we need it.

You know, “when the student is ready, the teacher appears” and all that.

When Marketog first came out from The Modern Tog, I looked through all the material and found it thorough, comprehensive, well-researched, and deeply useful.

The course thoroughly covers marketing for photographers, a perpetual burr under everyone’s saddle.  It’s designed not just to give info, but for you to implement it as you follow along.  By the time you’re done, you have a series of impressive, self-reinforcing systems in place to bring in clients.

That means work for you.

But it also means you’ll be more likely to actually get something out of it than if you just read something and let it languish on your hard drive (ahem).

I hung back on sharing my excitement about it, because I also wanted to see how other P4P readers reacted to it.  I might think something is useful, but I’m only one data point.  No education is one-size fits all, so I wanted to make sure that it was as well-received by others as it was by me.

And I’m happy to say that in the following months, I’ve also gotten enough unsolicited comments like those below, that I feel it’s well worth you checking out.

You can click here to get your name on the list to be notified when it opens, and to get more information.

The links here are affiliate links, which means they’ll know I sent you, and so a portion of any purchase would go to support P4P, which I appreciate.  However, if you’d rather not do that you can just Google “marketog” and you’ll get to the same place.  It doesn’t really matter to me, but either way, I do hope you check it out.  🙂

How To Be Assertive (Without Feeling Bad) 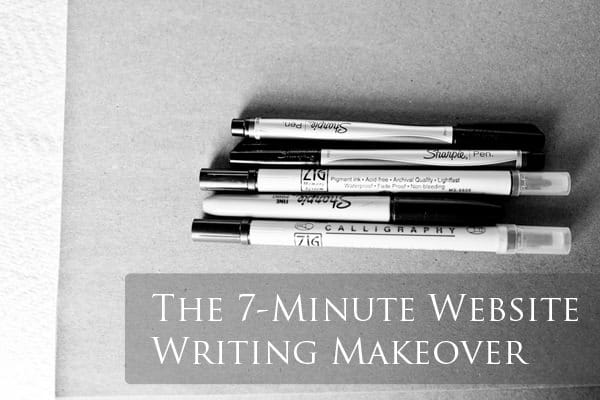